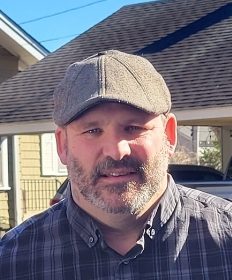 Here is a short and abbreviated testimony of my life and how Jesus changed me! My name is Dale Morey and for most of my life I was a troublemaker.  I was sexually abused as a child for many years. I’ve abused my body, as well as others, not sexually, but with violence. I’ve spent countless days and years in rehabs, living on the streets, in juvenile homes, and in jails/prisons in 3 different states. I paid a very long visit in 1998 when I spent five years in prison.  I am also an ex-gang member and a recovered (not recovering…) drug addict (meth, dope, crack, etc.) and alcoholic. I started out in Father Baker Boy’s home (Buffalo, NY) when I was 13 and graduated to jail by the age of 16.  I did my first jail “bid” in Troy New York, and it only got worse from there. I realized by all that I was doing, I was trying to fill a void with all the drugs, sex, crime, drinking, and so on.  Yet this void remained and the worse I got. I was fueled by all the hate and bitterness that was stored up inside of me and I unleashed it on myself and anyone and anything that I could. The only thing left for me was a casket in the cold ground.

While in prison I first heard of the gospel.  There were many people that would come in and preach to us and God began to give me a desire for his word.  There was a transformation in my life for a short while  and I saw a much work of God while in prison.  At that time, I thought I was saved even though I had never come to repentance.  I was like the person in Matthew 13:19, who heard the word but didn’t understand, and the wicked one plucked the word out of my heart.  I had caught jail house religion and knew that all I was trying to do was fill that void – but this time with religion.

I was released in November of 2002 and was determined to never go back to prison, to jails, rehab, or any other institution again. In December of 2002 I met my wife, Amy.  Amy and I come from two different worlds and I was amazed that she wanted to be with someone like me.  Somehow, she was able to see more in me than I could see in myself.  In 2004 we were married, and she became the love of my life.  But things quickly went south. I picked up drinking again as well as used drugs. I was abusive to my wife, so much so she would pray God would take me out of this life. She loved me but didn’t want to divorce me, so she asked God to kill me. I sat home medicated from a psychiatrist to keep me from harming myself as well as others and was put on disability.

Both Amy and I thought we were saved when we met each other.  We faithfully went to church, went to Christian conferences, and were active members in a church.  We were like so many in the churches of today – we were religious, we were sincere, but something was missing.  Something was never settled in our hearts.  I never had complete assurance of salvation and I was told that it didn’t matter.  A few years ago, I began to learn just how important the bible really is.  I began to hear preaching about true repentance and the assurance God gives to his truly born-again believers.  I began to long for that salvation and the assurance that it brought.  There was a war between the words of men who told me that not everyone had perfect assurance of salvation and the bible which told me that “The Spirit itself beareth witness with our spirit, that we are the children of God, Romans 8:16.”  By God’s mercy and grace, I began to trust his word and to believe that God could save me so utterly that I would have his witness within me.  I truly came to believe the Word of God is basic instructions before leaving Earth (BIBLE) and that it could deliver what God had promised.

It was through the preaching at the Black Creek Baptist Church (Black Creek, NY) that I finally realized I was lost.  God finally broke down my resistance and my pride and convinced me of my sin and of his righteousness.  Because I had trusted the cheap salvation techniques practiced today, such as “repeat after me” prayers that people had me pray, I could have died and gone to hell.   Salvation is quick; it was instantaneous when God finally got me to repent.  Salvation is when God saves you, not men. After listening to a weeklong of powerful services by an  evangelist, I had enough.  I requested that both my pastor and the evangelist come to my house.   As they were crying out to God, I was in the corner, and God broke my pride, I repented, and the Lord saved me – in an instant; never to question my salvation again.

I HAVE a salvation that I KNOW that I am saved which is spoken in the bible (1 Jn. 5:13  These things have I written unto you that believe on the name of the Son of God; that ye may know that ye have eternal life, and that ye may believe on the name of the Son of God.) My life has been transformed. I no longer take medication to help me stay calm, no longer drink, or do drugs to numb my pain. God didn’t answer Amy’s prayer to kill me, no God gave her a new husband and my children a new father. For the first time in my life, as the bible says in John 8:32, And ye shall know the truth, and the truth shall MAKE you free. Many of times I was set free from jails, rehabs, and mental hospitals.  However, for the first time in my life, Jesus has “MADE” me free – something I NEVER had in my life. I am a new man, with a HOPE to share with people – that Jesus can change their life; that it does not have to be this way again. I am now a missionary to those in jails/prisons across the United States through my local church, at the Black Creek Baptist Church. I graduated with my doctorate in counseling to help the men and women I work with. Many years I held onto “Jail-house-religion” which never did anything, and now I have a “relationship” with Jesus, and He has changed everything.

Copyright © 2022 by Liberty Behind Bars, Inc. All rights reserved
Designed and Hosted by Downeast IT